The Spanish media continue to explain how important Newcastle United could be for Barcelona’s transfer plans in January.

Much of the story revolves around Philippe Coutinho, and in their Thursday edition, Sport again make it clear that Barca are waiting for Newcastle to make a move for the player, hoping they can get rid of his wages.

Ronald Koeman’s exit has made Coutinho’s situation even worse and it’s not thought that Xavi Hernandez, who Barcelona are trying to appoint as their new manager, will be keen on including the Brazilian in his plans.

The Catalan club would be prepared to loan Coutinho to Newcastle, although it’s stated they’d want the Magpies to agree to a mandatory purchase option for next summer. However, beggars can’t be choosers and if Newcastle negotiate this one well… there’s the chance of a more beneficial deal. 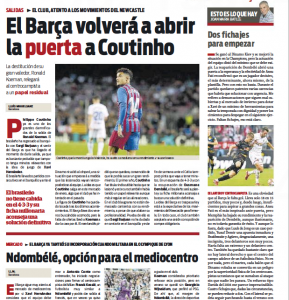 Getting rid of Coutinho’s wages would help Barcelona sign their own targets, with Tottenham’s Tanguy Ndombele presented as a possibility.

Taking Dani Olmo from RB Leipzig is another option, yet the Blaugrana need to rid themselves of some wages first.

Coutinho is the obvious option, and Newcastle the obvious destination as far as the Catalan media is concerned.