Having signed Gianluca Mancini from Atalanta, AS Roma’s need for a starting centre-back has been quelled somewhat, but that doesn’t mean they’re ready to give up on Toby Alderweireld just yet.

Refusing to lower their demands for the Belgian, Tottenham have taken the defender on tour with them, meaning little is likely to happen until they get back, if it even does.

Il Messaggero in Italy believe there will be some movement in the ‘next few days’, as they explain it’s ‘expected’ for the Serie A to make contact with the Spurs hierarchy once again to discuss a potential transfer.

What they hope to achieve isn’t revealed, but you would have to think that any future attempts to convince Daniel Levy to sell for less than €28m will prove as futile as they did last week. 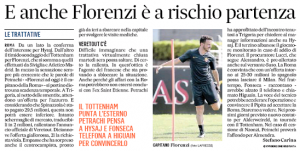 For now, the attention appears to have turned to Alessandro Florenzi, at least from Tottenham’s end, after Kieran Trippier agreed to move to Atlético Madrid after four years with the Premier League side.

We guess we’re going to have to wait a bit for more details, then?