Moise Kean’s return to PSG this summer could be about to hit stormy waters, with Tuesday’s edition of L’Equipe seeming to talk down the potential transfer fee.

Moving to PSG on loan from Everton last summer, Kean has been a success for the French club. The 21-year-old scored 13 goals in 26 Ligue 1 appearances, and a further three in six Champions League matches.

The success of Kean’s season is slightly weighted towards the first half of the campaign, so under Thomas Tuchel rather than Mauricio Pochettino.

L’Equipe report the Everton owned player has been house-hunting in Paris, clearly hopeful that he’s going to return to the club in the coming window. The French newspaper report negotiations are ongoing between the parties in a potential deal, but it’s what they say next which will raise eyebrows: ‘The current valuation is between €25m and €30m’ 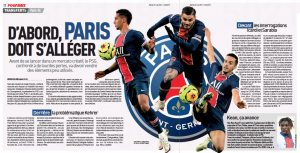 That looks on the low side.

Whilst claims that Kean could be worth as much as €80m this summer seemed well over the top, the figures pushed in France look a push in the other direction.