Even though Andraz Sporar’s transfer from Sporting to Middlesbrough is taking a lot longer than expect, the talks for the move continue to progress, according to the Portuguese media.

Newspaper A Bola today writes that the clubs keep talking to find a solution for an agreement, as there are still a couple of issues blocking the deal taking the player to Riverside.

The outlet says one problem is the tax matters, and the other is the player’s salary.

Sporar makes €1.2m net at Sporting and ‘won’t give up on one cent’, but Boro can’t afford 100% of that, so they continue to negotiate for the Lions to keep paying for at least part of it. 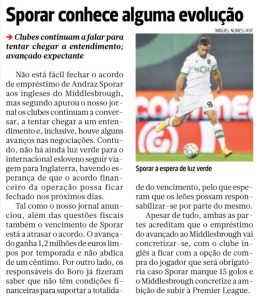 Despite those issues, A Bola says ‘both parties’ believe the move is happening, as there’s hope the transfer can be done in the coming days.

Sporar is set to move to Boro on a one-year loan deal, and the Championship side will have a buying option which will be triggered in case he scores 15 goals in the season and they get promoted to the Premier League.

Even though A Bola doesn’t say it this time, the clause is expected to be worth €8.5m.

Chelsea player trying to ‘convince’ star to join Blues – ‘Regularly talks’ with him, ‘spirit of revenge’

Granovskaia can still help Chelsea get transfer over the line –...