There could be a positive few days ahead for Barcelona, which would be a boost after the past few days.

Ronald Koeman’s future at the Camp Nou is looking increasingly fragile, and Joan Laporta’s Friday press conference kicked that particular can further down the road.

Not only did the Barcelona president outwardly make clear the Dutchman hasn’t been his choice as manager, insinuating a change could be on the way, he also wasn’t straight about Koeman’s medical situation.

That has, understandably, caused annoyance for the manager and those around him, and it’s likely more will be made of it in the coming days.

Before then, will be incoming signings, making it pretty clear that transfers aren’t the job of the coach at Barcelona. AS report medicals and announcements are on the way, with the first batch having a distinct Manchester City feel. 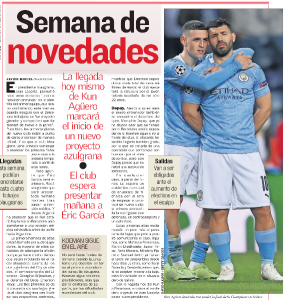 Eric Garcia is said to have already had his medical, and an announcement is expected on Tuesday to confirm his arrival. Sergio Aguero is expected in Catalonia on Monday for a ‘comprehensive medical’ before he leaves for Argentina, with the announcement squeezed in somewhere.

Georgino Wijnaldum would be next up, with the Liverpool midfielder joining the others in free-agent status, and Emerson Royal is considered just a matter of time.