Eden Hazard potentially returning to Chelsea this summer has been brought back to the table by Spanish newspaper AS.

They reiterate the Belgium international is keen to go back to Stamford Bridge and start a new era with the Champions League winners. Things haven’t worked out since his huge move to Real Madrid, and Zinedine Zidane’s exit is seen as a serious further blow.

The French manager has been a big protector of Hazard, unwilling to join in the widespread criticism and backing his player to come good eventually. That helped create something of a protection cocoon, especially given some of those higher up the Madrid food-chain had become tired of their big money purchase and his injury issues.

AS state Los Blancos are ‘willing’ to listen to offers and facilitate a transfer this summer. Should that happen, they’d hope to get a chunk back of the €100m+ they paid to Chelsea, with there being no illusion of being able to match such a figure.

Such an exit would help Madrid’s finances and be a summer-changing transfer for them. 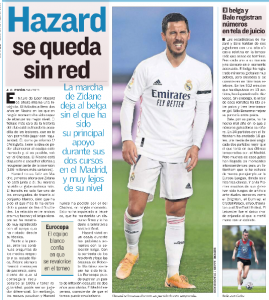 Hazard returning to Chelsea would certainly be great for nostalgia, yet Thomas Tuchel may well have other ideas. He could doubt how the player would fit into his system, and on a club level there would be the Belgian’s huge wages to consider.

So whilst it may be true that Hazard fancies going back to his Blues home, he could find out they’ve moved on well without him.