Three days ago we brought a claim from Italy that West Ham are keen on signing Franco Vazquez from Sevilla.

The former Palermo player was said to be of interest to the Hammers and he seemed a reasonable bet for a Manuel Lanzini replacement.

West Ham were said to have made an approach and there was confidence a deal could be done by the Premier League club.

Those claims were then picked up in Spain, specifically by Sevilla’s local media. Estadio Deportivo reported that if the Hammers were to try and sign Vazquez then a transfer would be possible for a ‘good offer’.

Thursday’s edition of Marca continues this. 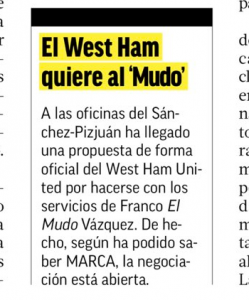 The Spanish newspaper reports that an ‘official proposal’ has now arrived at Sevilla. Not only that, it’s claimed a negotiation for the transfer of the player is ‘now open’.

Vazquez made 44 appearances for Sevilla last season, playing mainly as an attacking midfielder. He scored 5 goals and made 7 assists during that time.