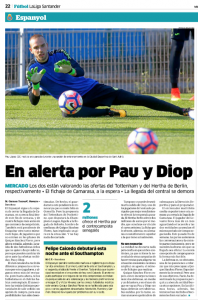 Spanish newspaper Marca have finally weighed into the Pau Lopez to Tottenham Hotspur rumour on Wednesday, in an interesting and considered article.

Marca explain that Pau isn’t a player Espanyol were looking to sell this summer. The club are eager to let go of several players, but the young goalkeeper certainly isn’t one of those.

Fittingly, Pau hadn’t wanted to leave either. There’d been several approaches to leave on loan with a purchase option, but Pau had decided to reject them, along with Espanyol. The next natural step was renewing Pau’s contract at the club. but then Tottenham turned up.

The combined lure of Tottenham Hotspur and Mauricio Pochettino have seen a ‘shift in the situation’, and a transfer is now being considered.

However, Pau hasn’t asked to leave and Espanyol still don’t want to sell. A move will only happen if Tottenham please Espanyol financially, and given it was reported yesterday that they’d only offered €2m, then that’s not happened yet.

Pau was called up by Vicente del Bosque for Spain’s full squad in May for an international friendly.