Raphaël Varane’s arrival at Old Trafford should have solidified Manchester United’s back four, but the reality is their defence has struggled this season.

This has given rise to reports of the Red Devils’ interest in Jules Koundé. The Sevilla star was wanted by Chelsea in the summer, but the Blues refused to meet the demands set by the La Liga side.

He has an €80m release clause and the Spanish press have repeatedly stressed this is the figure, or at least something close to it, needed to take the defender away from his current employer.

Less than a week later, Estadio Deportivo backed up those claims and suggested a transfer could happen sooner or later as Julen Lopetegui’s side are finding it difficult to renew the defender’s contract.

On Thursday, Sevilla president José Castro insisted his side have not had any offers for the 23-year-old, but admitted they will study what they receive.

AS on Friday relay it and state the Spanish club justified to shareholders their decision not to sell the former Bordeaux man in the last window, despite incurring ‘losses of €42m’.

Sacrificing Koundé in January will be a blow for Lopetegui’s plans, ‘even greater than it could have been in the summer’. This is taken into account at Sevilla, where they are also aware ‘it is mandatory to balance economics’, so offers need to be considered. 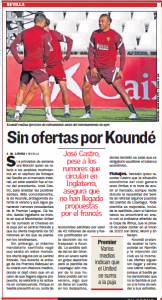 Castro also reminded shareholders the club’s economic situation restricts them from making new signings in the winter market, even though the squad needs bolstering.

After the chief’s comments, multiple sources in Spain are stressing Sevilla’s economic situation.

Koundé’s sale could help his employer financially and if Manchester United were to submit a proposal, Sevilla would have to consider it.

AS, who again mention the Red Devils, explain neither the player nor Sevilla have an intention to part ways in January.

The summer is likelier.