Earlier this week, El Chiringuito, love them or hate them, started the rumour that Frenkie de Jong could be edged towards the Barcelona exit door.

The idea was that the Blaugrana have some great talent coming through in midfield, and Xavi Hernandez could use funds from selling the Dutchman to help him invest in other, more needy, squad areas.

Inevitably, the claims snowballed and saw other clubs brought into the equation. That, also inevitably, saw Manchester City mentioned, with claims Pep Guardiola’s side would be willing to spend €90m on the Dutchman.

It was even stated a formal proposal was on the table, or soon to be, and we explained at the time that things were getting a bit carried away on the De Jong front.

Friday’s edition of Mundo Deportivo now makes a move to rubbish everything.

Xavier Bosch, an experienced and well known Spanish journalist, wastes no time in getting to the point, saying: ‘Frenkie de Jong will not move from Barça.’ 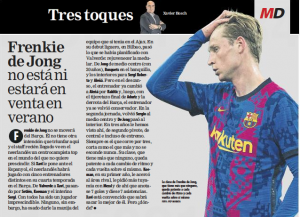 The player ‘has no other intention’ that to do well with Barcelona, and those in charge of the team at the Camp Nou, namely Xavi, don’t want to see the back of him.

The midfielder has now been under the orders of five different coaches since he moved from Ajax, and Bosch feels he’s had something of a hard time.

It’s now down to Xavi to help De Jong shine and keep all these rumours firmly tucked in the bin.