Finishing fourth in the FA WSL last season, Manchester United W.F.C wanted to strengthen themselves this summer to try for a more convincing title push.

Five players came in, with Vilde Bøe Risa, Hannah Blundell, Sophie Baggaley, Aoife Mannion and Martha Thomas all signed, but another could have been Stina Blackstenius.

That’s according to Aftonbladet, who have an article on the matter, explaining that following Filippa Angeldahl’s transfer to Manchester City, BK Häcken decided against letting another of their stars go.

They state that according to their information, Manchester United W.F.C ‘were interested in recruiting the striker’, but her club decided against a transfer, leaving Blackstenius to have to wait until the next opportunity to sort out her future.

She said: “I know there is interest. As I said before, I only now try to focus on doing as well as possible in Häcken. I am happy about the interest that exists and I will review my opportunities a little later”. 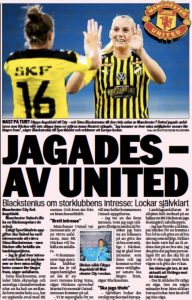 Häcken even admitted to there being interest in Blackstenius, but fell short of revealing it was Manchester United who were after their star.

Their sports director, Martin Ericsson, said: “We do not comment on specific clubs, but it is no secret that there is a great deal of interest in Stina. We are super happy to have Stina at our disposal for the rest of the season and we have great ambitions that Stina will be at BK Häcken longer than that”.

Asked directly about Manchester United W.F.C, he said: “I do not go into specific clubs, there is a broad interest”.

This means Marc Skinner will have to wait a little longer before signing Blackstenius, whom he clearly sees as ideal to bolster his frontline at Leigh Sports Village.