Manchester United had an official at Benfica’s 4-1 victory over Santa Clara on Saturday, and even before the match the stated reason was João Félix.

That may be jumping to conclusions, given the Premier League club have been scouting nearly every Benfica match for well over a year. They’ll know everything there is to know about the 19 year old and all his teammates.

Breaking into the Benfica first team this season and making 37 appearances, mainly as a starter, he’s scored 19 goals and added eight assists.

The right footer plays upfront, and tends to drift to the right, so could be an option for that side of Manchester United’s attack.

Sunday’s edition of Record reports the Old Trafford club and Atletico Madrid both intend to ‘win the race’ for his signing. 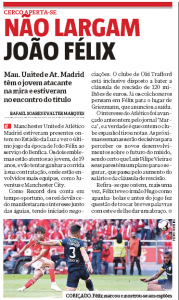 The English club have already ‘started negotiations’ and it’s claimed they’d even be prepared to meet the player’s €120m clause.

At Atletico, they see him as a potential replacement for Antoine Griezmann.

Record states ‘the next few weeks will be decisive’ in the potential transfer.

The Red Devils’ official will have seen João Félix score a really nice goal to put his side 2-0 ahead.