Of all the Champions League results this week, Manchester United’s 5-0 demolition of RB Leipzig was definitely the most surprising.

Absolutely nobody could have predicted such a result, with most believing United were in for a tough time at Old Trafford.

Instead, they walked away with an impressive scoreline and performance, something which is reflected in the media coverage from Germany today.

SportBILD kick us off with their player ratings, and it’s fair to say Manchester United’s players all come out with favourable scores indeed.

Now, the player ratings are very different to what you’re probably used to. Whilst most ratings are out of 10, or sometimes 5, Bild use the German school grading system.

A six is the lowest possible grade and, taking it back to the school grades; it means that not only were things not up to standard, but there was even a failure to understand the basics.

With that in mind, you can see United do very well indeed, with Ole Gunnar Solskjaer and Marcus Rashford scoring ones, Harry Maguire, Victor Lindelof, Paul Pogba and Bruno Fernandes on twos and everyone else getting a three.

Leipzig, meanwhile, score very low, with nobody getting higher than a four and Benjamin Henrichs even scoring a six. Julien Nagelsmann gets a five, or ‘deficient’ rating.

SportBILD leave their ratings as the major comment on the game, but do say that Leipzig ‘cashed the first bankruptcy of the season’ with their performance at Old Trafford.

Kicker follow this up and label the performance a ‘debacle’ from Leipzig, stating that Nagelsmann’s ‘weapons remained blunt’, and his match plan ‘did not work out at all’.

They claim that ‘many inaccuracies and misunderstandings’ were the main reason the Bundesliga side did not keep up the pace in the game and so were ‘hardly ever dangerous’.

Largely it’s criticism for Leipzig, which is to be expected, but there is some praise for Manchester United, who they say ‘presented themselves as a different calibre’ and put in a ‘great performance’ in the game. 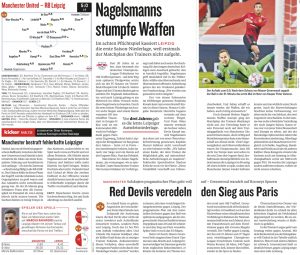 NTV are next up and say that Leipzig were ‘given a lesson’ and a ‘rude awakening’ by Manchester United, with Marcus Rashford dismantling them with his hattrick.

They claim that using ‘great individual class’ United were able to bypass Leipzig’s pressing game and used the German’s style of football against them which saw the game ‘neutralised’ in the middle of the park.

TZ, meanwhile, also label the game a ‘debacle’ for the Bundesliga side who ‘got under the wheels’ at Old Trafford and suffered the biggest defeat in their history as a result.

Der Spiegel conclude the roundup and are a little more fair, stating that Leipzig held their own until Rashford’s appearance from the bench led to their defence collapsing.

They have indirect praise for Manchester United, stating that their ‘well-organised defence’ helped to neutralise Leipzig’s fast, counterattacking game and set themselves on the way to a famous victory.

So, all in all, a joyous evening for United, who not only made it six points out of six in the Champions League but also earned themselves plenty of plaudits in Germany too.