Bought from Juventus in a £25m deal last summer, Moise Kean had a fair number of expectations placed on him at Everton.

Breaking through with the Serie A side by scoring a number of goals for the first-team, the young forward failed to replicate that form at Goodison Park, whether it be under Marco Silva or Carlo Ancelotti.

This led to him being loaned out to Paris Saint-Germain in the last transfer window, a move that appears to now be paying off.

While he may have struggled in his first two outings against Nîmes Olympique and Manchester United, the 20-year-old has since made up for that by scoring four goals in two games against Dijon and Basaksehir.

His performance against the Turkish side is highlighed on L’Equipe’s front page on Thursday morning, as Kean scored both goals in the 2-0 win, finally showing why Everton gambled on him previously and why Leonardo brought him in on loan for Thomas Tuchel.

Going with the headline “And Moise saved Paris”, the French newspaper also dedicate an article about how his partnership with Kylian Mbappé is already working.

On top of that, they interviewed former Paris Saint-Germain striker Mevlut Erdinc about the game, and specifically asked about Kean. 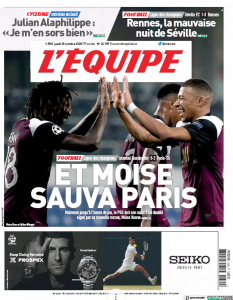 He said: “We were waiting for Mbappé and Neymar, and he’s the one that comes out of the hat. He proves this individualistic quality within the squad. You can see he’s a drifting striker, who smells the goal and who can position himself in the box. I think PSG can help him explode.

“He’s an international at 20, a big club player who showed himself at Juventus. PSG is made for him, and not even in a luxury secondary role. A player who scores, braces at that, you have to leave him on the pitch. Mauro Icardi can start worrying. You can also feel a connection with Mbappé. For now, he’s a good pick and the best news for PSG in this early season”.

Originally thought to be a dry loan, there have since been reports the Ligue 1 side can make Kean’s move permanent for a fee of €20m, although they have yet to be officially confirmed.