In case you missed it last night, Manchester United will be continuing their European adventure in the Europa League after defeat to RB Leipzig.

A miserable evening in Germany saw Ole Gunnar Solskjaer’s side beaten by their Bundesliga counterparts, who were deserved winners on the balance of play.

Ahead inside a minute courtesy of a strike from Angeliño, Leipzig took advantage of a poor display all round from United to get themselves 3-0 up by the 70th minute, which proved enough to see off a spirited late push from the visitors.

All in all, it was a forgettable performance from Solskjaer’s side, with perhaps only Bruno Fernandes coming out of the game with any credit.

That is certainly reflected in the coverage of the result from Germany today, starting with BILD’s player ratings.

Now, to explain Bild’s player ratings are very different to what we’re used to. Whilst most ratings are out of 10, or sometimes 5, they use the German school grading system. 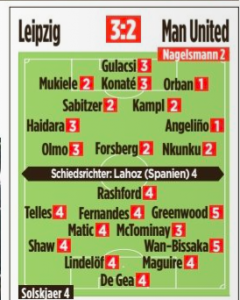 A six is the lowest possible grade and, taking it back to the school grad; it means that not only were things not up to standard, but there was even a failure to understand the basics.

With that in mind, Manchester United’s ratings make for grim reading. The highest-rated player is Scott McTominay, who scores a three, while everyone else bar Mason Greenwood and Aaron Wan Bissaka, who get fives, are scored four.

Solskjaer is also given a four, which means he was ‘passable’, which will sting given Julien Nagelsmann is given a rating of two.

Indeed, Leipzig score highly across the board, with nobody ranking lower than three and two players, Willi Orban and Angeliño, given the highest marks possible. The praise is not limited to BILD either.

Sky Sport Germany also dole out high marks with plenty of ones and twos, with only Dani Olmo getting any criticism with a score of four.

Kicker say they ‘saved the leadership’ with their win and progression to the last sixteen, which was secured courtesy of a ‘furious start’ followed by a ‘tremble in the end’.

Spox, meanwhile, label the win a ‘prestigious victory’ for Leipzig, saying they took revenge for the 5-0 defeat earlier this year courtesy of a ‘convincing’ first-half performance in which their ‘enormous physicality’ made it difficult for Manchester United.

TZ also credit the win on an ‘unbelievable first half’ and state that Manchester United simply ‘woke up too late’ to give themselves a fighting chance of getting a positive result.

Der Spiegel conclude by following the same route, saying Leipzig ’started furiously’ in the game, a strategy which meant United ’hardly got into’ it and did not have a ‘clear scoring chance’ until long into the game.

They are a little more critical of Manchester United, though, labelling the result a ‘debacle’ and saying at one stage their performance was ‘pitiful’.

They do praise the likes of Fernandes saying he is one of the reason the club doesn’t have ‘bigger problems’ but criticise Solskjaer, believing he may need a miracle like the one he performed against Bayern Munich in 1999 to save himself.

Most of the coverage is praise for Leipzig, though, with it generally felt they caught United off guard and raced into a lead that, despite a ‘tremble’ towards the end, United were unable to overcome.

That will probably hurt the most for Solskjaer and co, who will know this morning that it is through their own faults, rather than Leipzig’s strengths, that this game got away from them.