Home Europe Manchester United player on penalty ‘hierarchy’ at the club – And what...
SHARE

We’ve already published two pieces from that chat. One about his move to the Red Devils, which he claims he never forced, and another one regarding his friendship with Bruno Fernandes.

But Telles had a lot more to say, especially about his first months at Old Trafford, so here are a few more quotes from the Brazil international.

First speaking about Premier League football, the fullback claims he found a much more physical league than he was used to seeing in Portugal.

“Each league has its particularities and difficulties. The Portuguese league is very evolved, has players with a lot of quality, I always see the games and they are getting more and more difficult. In the Premier League, I felt a lot of difference on the physical side, on the intensity,” Alex Telles told O Jogo.

“Something that happened in Portugal, and that doesn’t happen much here, are the fouls, there are many fouls in Portugal and here they practically don’t happen, only even if it’s a tougher and clearer foul, otherwise the game goes on, it’s always in progress. The players are much more physical, much taller. The set pieces here make a lot of difference.” 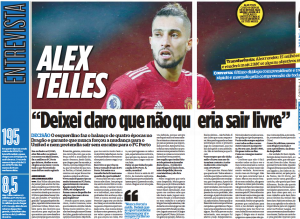 Asked about the main candidates for the Premier League title, Telles preferred to talk about his expectations for Manchester United this season.

“I can’t say a candidate… if I say one, I’ll obviously say Manchester United, that’s what I want them to win. But with each passing year there’s a team that stands out, Liverpool, City, Tottenham, Leicester… I can’t see a favourite or two, I see many and certainly United is in that group and will fight for it.

“The level of the players and the history of the club always forces you to think about winning titles, and first the Premier League. We didn’t pass in the Champions League, but I think Premier is being very positive. The start wasn’t very good, but we had six or seven wins in a row and we jumped the table, with one game less. This is felt in the dressing room, we know the importance of the Premier, how long the club has not won it, and we know the weight it has.”

Telles also spoke about his Coronavirus diagnosis and what the coaching staff have been telling him in his first months at the club.

“It got in the way. I think I caught the virus on one of the trips for the Brazilian national team. I had made my debut against PSG, a victory for the Champions League away from home. I was very happy and soon after I contracted the virus and I had to stop for 14 days, training at home. The adaptation wasn’t easy, but after all that there was another trip for the national team, I managed to prepare myself again and come back with everything. I played practically seven games in a row at the time, Luke Shaw was hurt and I managed to have a very good streak. I believe it is a very positive start and now it’s to continue.

“They ask me to fulfil the role, which is different, each team has its own particular way of playing. But it’s about fulfilling the roles in the best way, being attentive to decisions and I had not changed my way of playing, doing what I had been doing to get here. They know about my quality on the crosses, my offensive part, the defensive part is also very important.”

Alex Telles used to take some penalties at Porto. Everyone knows Bruno Fernandes is the first choice at Manchester United, but the Brazilian was asked if there’s any chance he could be the one in case his teammate is out of the game.

“At the start it’s more difficult. I know my quality, I know where I can enter and perform, but I learned early on to respect hierarchy. I respect the coach a lot, the people who are above and I know that here there are players with a lot of quality who already took penalties. Not being Bruno, there are Rashford, Martial, Cavani, Pogba… they are players who take penalties in an incredible way. I’m in my place waiting for a chance. If I have it, obviously, I want to take advantage of it, my mission is to be able to make assists, goals and give my best.”