Takvim report Fenerbahce have been offered the chance to sign Manchester United defender Diogo Dalot on a temporary basis.

The Portuguese right-back, who spent last season on loan at AC Milan, could leave the Premier League club again, and Takvim claim agents have offered him to Fenerbahce.

The Turkish side are in the market for a right-back, with Gokhan Gonul likely to leave this summer, and it’s reported they are now considering whether to make a move for Dalot.

Takvim claim if Fener are able to bring the 22-year-old to Istanbul it would be on a one-year loan deal, but a redemption clause is unlikely to be inserted into any agreement.

All this sounds very unlikely, given reports coming from Italy.

AC Milan are thought to want the player back next season, and will work this summer to try and find a favourable deal with Manchester United. Dalot is also thought to be keen on a return to the Rossoneri, so it doesn’t make sense for someone to have offered him to Fenerbahce.

Therefore this could be intermediaries at work who have no direct links with either the Portugal international or his club, and are simply chasing commission on an off-chance. 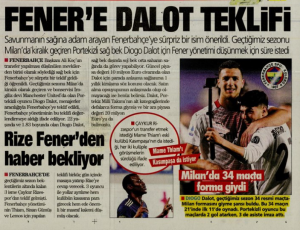 The player’s contract with United will expire at the end of June 2023.