There were lots of words but it didn’t really say a lot new on the situation of the reported Manchester United target. He has a €35m clause, although that isn’t a straight get-out.

If a club makes an official offer of €35m or more and it’s rejected, then Bruno’s camp is due €5m plus a hefty pay-rise. This is only applicable once, United can’t keep offering €35m and seeing Bruno become €5m richer each time.

So, in theory, if a club offers €50m officially, and Sporting say no, then they’d be €55m plus a big pay rise down.

Monday’s edition of A Bola says Manchester United’s ‘first poll’ of €50m didn’t even ‘reach the table’. That could be because Sporting don’t want it to, given what has been explained above.

The Portuguese newspaper then says there’s ‘British talk’ of a new €62m offer, which we’d assume means newspapers in England. However, this hasn’t turned up, not officially anyway.

PSG interest is talked up, although at this stage it sounds like a mechanism to pressure Manchester United. It’s believed that’s working, with the feeling things are speeding up.

A Bola once again state that Bruno’s agents have been travelling to England to try and get the values higher, and this has been happening for some time now. 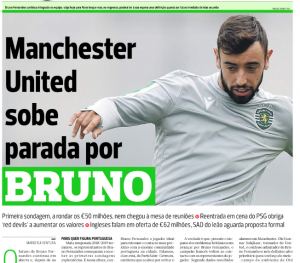 Ed Woodward will be aware of that €35m clause, and it’s possible he’s still using it to exert pressure.

So on one side we have Sporting holding out for €70m, and on the other we have Manchester United almost certainly feeling that’s too much and keeping the idea that any rejected official offer costs the Lisbon club €5m+.