At the end of April, reports coming out of Italy and Spain explained Manchester City are following Robin Gosens, with Mundo Deportivo even stating the Citizens are interested in signing the Atalanta star.

Another Catalan newspaper, Sport, now details clubs that are looking to land the left-back this summer.

As part of remodelling the squad for next season, Barcelona plan to sell Junior Firpo and bring in a new player to challenge Jordi Alba for a place in their starting lineup. This is where Gosens comes into the picture.

It’s claimed the La Liga side ‘like’ the 26-year-old, who has enjoyed a fantastic season in Italy, scoring 12 goals and registering eight assists in all competitions.

Apart from Barca, Sport explain ‘many clubs are behind him’ and Pep Guardiola’s side get a mention.

As per the report, Leicester City, Inter Milan, Juventus and AC Milan have already contacted the fullback, while Manchester City would be ‘willing to bid’ for the Germany international.

The defender’s contract runs down in 2022, but the Serie A side have an option to further extend it by a year. 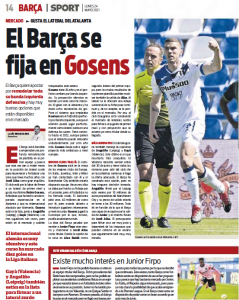 Gosens, for his part, ‘wants to go’ to a club that has a ‘more ambitious project’ than Atalanta at the European level.

To sell him, Atalanta are asking €40m, but they also be open to the idea of conducting an exchange deal for Gosens.