In the past few months, Manchester City emerged as one of the competitors for the signing of Benfica striker Darwin Nunez, with insistence that the club have an ‘old love’ for the striker.

And as the Lisbon media once again writes about the player today, Pep Guardiola’s side, of course, get a new mention.

It’s Record who now features a piece on the 22-year-old’s situation, as they bring an update on his agents’ efforts to gather new bids for his transfer.

It’s said that after a trip to Madrid, Darwin’s representative Edgardo Lasalvia has now been in Milan, where he spoke to the two big clubs in town.

That means the competition for the signing is only growing, and Manchester City are named once again as one of the many English clubs who are interested in the signing. 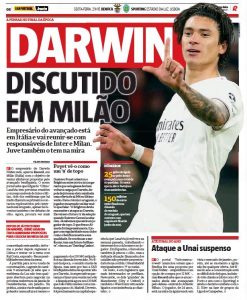 Now even though Darwin’s agent has been speaking to several parties, he knows it won’t be easy to take the striker away from Lisbon. Firstly, because there’s no margin for negotiation in the January window, as Benfica will only let him go in case someone triggers his €150m release clause.

And even in case of a summer transfer, the Eagles will continue being tough. The intention is now to make the Uruguayan their biggest sale ever, and that means negotiating for over €120m, which is the price Atletico Madrid spent on João Félix.

Featuring for Benfica this season, Nunez has 11 goals and two assists in 16 appearances.

Benfica are, clearly, not getting €120m for him, and Manchester City will be well aware of how to negotiate with the club, having done repeat business with the Lisbon side in recent years.

That would give them a knowledge advantage, and also means they have contacts in place.