After the Red Devils’ interest emerged, Rennes director Florian Maurice admitted the club are set to hold talks with the 18-year-old this week, to find out his ‘desire and determination’.

The midfielder’s current deal lasts until 2022 and a failure from them to tie him down will see them risk losing him for free next summer.

L’Equipe on Wednesday explain the interest of Paris Saint-Germain and the Old Trafford club has ‘emerged’ in Camavinga. The Ligue 1 side, for their part, have been trying to extend the young French star’s contract beyond 2022.

Ahead of the preparation for new season, Rennes manager Bruno Génésio appeared in front of the media on Tuesday and was quizzed about Camavinga’s situation.

“We have already stressed several times that we cannot afford to remain in this situation concerning an international player like him,” Génésio said, as relayed by L’Equipe. 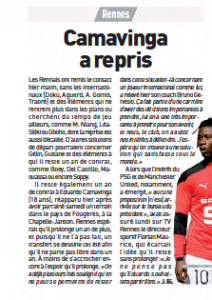 “It’s part of a career to have important decisions to make, he has a very important one [decision] to make for his future, and we at the club also have our interests to defend. I hope we find a solution that everyone is satisfied with.”

With Manchester United and PSG showing interest in him, Génésio has now joined Maurice in admitting that Camavinga has a decision to make on his future.