Home Europe Manager has made Man City player his ‘favourite’ to be signed this...
SHARE

If there is one man who would profit from Cristiano Ronaldo’s departure at Juventus, it’s Gabriel Jesus.

That’s because the Manchester City striker has become Max Allegri’s ‘favourite’ to bolster the attack should the Portuguese superstar decide to find himself a new club this summer.

Ronaldo’s choices are slim, since few can accommodate his large salary, but should he find someone willing to pay him the money he wants, then the Manchester City striker could find himself going to Turin.

Gazzetta dello Sport are the ones continuing the push on this story, and they explain Allegri has ‘picked him out as his favourite’. 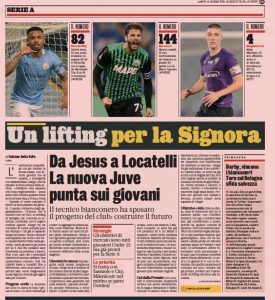 Everything would also depend on Manchester City, who will need to let him go on a loan, as Juventus won’t be able to buy him outright.

So, the ball will be in Pep Guardiola’s court if Ronaldo leave Juventus, but only then, not before, and Gabriel Jesus will be sat there watching the Portuguese’s next moves with great attention.