Ever since Bruno Fernandes arrived and made Manchester United tick, Paul Pogba seems happier than ever at Old Trafford.

Many articles have been written about this, and it has shown on the pitch as the Frenchman has been happy to sit back and let the Portuguese drive forward rather than trying to do it all himself.

While he might be happy, and there’s been talk of a new contract coming his way from the United brass, Real Madrid haven’t forgotten about him either.

This comes from L’Equipe, who remind everyone amid the great chase for Eduardo Camavinga that Pogba remains ‘the ideal recruit’ for Zinedine Zidane, and not signing him last summer ‘dreadfully annoyed’ the French manager. 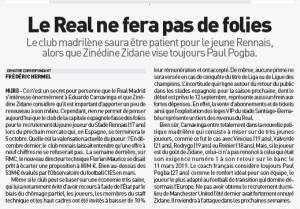 The Manchester United star was his ‘number one request’ when he agreed to return to Real Madrid for a second stint, and it’s stated the former France international ‘come back to attack again in the next few weeks’.

There’s no detail given about how that might happen, but even with things going very well at Old Trafford these days, we can’t escape the Pogba fanfare, even if it doesn’t appear to be coming from the player’s end this time around.