Earlier today, we covered Eric Bailly’s interview with Mundo Deportivo, in which the defender revealed a conversation with José Mourinho convinced him to reject Manchester City and join Manchester United.

The defender left Villarreal for the Red Devils in 2016 and was Mourinho’s first signing at Old Trafford. The Tottenham Hotspur manager was at United for over two years before his exit in December 2018.

Ole Gunnar Solskjaer replaced the Portuguese tactician, initially as an interim option before his position was made permanent in March 2019. Mourinho returned to coaching when Tottenham took him last November.

When asked about the differences between the Norwegian and the current Tottenham boss, Bailly told Mundo Deportivo: “The Portuguese is a world class coach, with experience, of great class. Perhaps with more character. Solskjaer has had much less time, it can be said that he has just started but he has done a good job so far,” the United player added.

The Ivory Coast international has struggled with various injuries since arriving in England, and that has restricted his minutes at Manchester United. 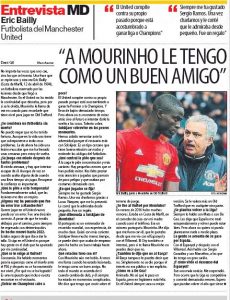 Although Mourinho is no longer at United, Bailly still remains in contact with his former manager.

“I still talk to Mourinho. Sometimes he calls me when I’ve been injured, I have him as a good friend. Not everyone remembers you when he changes clubs, and he has always been in difficult moments. He tells me that I have to die on the pitch,” he explained.