Pep Guardiola’s decision to extend his contract at Manchester City until 2023 has only intensified the rumours linking Barcelona star Lionel Messi to the Etihad club.

Earlier this week, The Times reported the Citizens are preparing a 10-year plan for the forward, which includes playing for other clubs owned by the City Football Group and also becoming an ambassador of the English side after his retirement.

Toni Frieros, the editor-in-chief of Sport, gives his take on why it is not easy for Messi to sign for the Premier League side and also explains it’s ‘difficult’ for City, both sporting and economic wise, to sign him.

The journalist questions why the 33-year-old would be willing to be an ambassador for City first before Barca, the club where he has spent the last two decades and the city where his children were born.

Frieros says: ‘Messi does not have to be grateful to Laporta, Rosell or Bartomeu. It is due, above all, to the club, its history, its crest, its colours and the thousands of members with whom he has made this wonderful journey full of successes and titles.’

Messi’s former teammates, Xavi, Andrés Iniesta and Carles Puyol, have already said they would like to return to Barca one day, and the same is likely to happen with Gerard Piqué and Sergio Busquets.

Even if the bond between the Argentine and the Catalan club breaks temporarily, there’s a good chance he could follow the aforementioned stars.

Guardiola had earlier said he think the South American will retire at the Camp Nou, and Frieros is of the belief the City manager said this ‘with his heart in his hand’.

The journalist suggests the coach knows that Messi is the ‘living history of Barca’, and therefore, he cannot represent any club other than the Blaugrana.

It’s claimed signing Messi ‘must be done with a cool head. Above all, out of necessity’.

Although the superstar’s addition to the Citizens squad would raise their level, Frieros has doubts whether Guardiola thinks of his former player because he will have to modify his system in order to fit Messi in, who is in his twilight of his career. 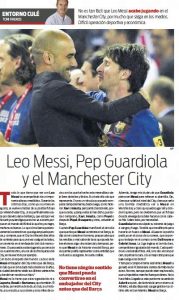 Frieros also dismisses money as the motive behind Messi’s decision to leave Barcelona last summer, suggesting he has already earned hundreds of millions at the club.

According to him ‘Messi is Barca’ and therefore, it ‘makes no sense’ to be City’s ambassador before Barça.

The attacker’s contract at Barcelona lasts until June 30th and the next few months should provide more clarity on where he will play next season.