Over the past few weeks, the Spanish media have repeatedly stated Manchester United retain an interest in Raphaël Varane and Real Madrid value him around €70m.

Defensa Central reported on Tuesday that the Red Devils have identified the defender as their ‘priority’ target and are ‘determined’ to sign him this summer.

It was also explained United are willing to offer an astronomical salary [around €12m per season] to convince the 28-year-old to join them.

The France international’s contract expires in 2022, while his teammate, Sergio Ramos has less than a month left on his current deal with Los Blancos. The duo have not yet accepted renewal offers proposed by the La Liga side, meaning Ramos can leave them as a free agent.

Mundo Deportivo state Real Madrid don’t want ‘another Ramos case’ with the former Lens man. They will sell him if he doesn’t accept their renewal offer, which includes a pay rise.

If Real Madrid fail to convince Varane to continue, they will look to cash around €50m from his sale.

The newspaper claims offers are not lacking for him as Ole Gunnar Solskjaer’s side are the ‘most interested club’ to sign the centre-back. Mundo echo claims made by Defensa Central that United are willing to offer Varane a contract worth €12m per season.

Real Madrid want to resolve the player’s situation sooner rather than later because if he’s sold, they will have to bring in a replacement for Varane. 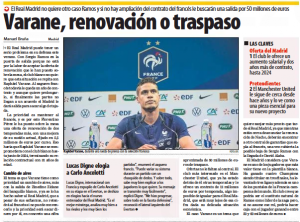 They have already signed David Alaba and he could take Ramos’ place in the squad, if the latter decides to leave this summer.

For several days, the Spanish media have been repeatedly stating Real Madrid have slapped a €70m valuation on Varane. Mundo’s latest report states they could allow the Frenchman to leave for €50m.