Romain Perraud is now on the verge of signing for Southampton, report L’Equipe in their Wednesday edition.

The left-back has been linked with a move to the Saints for a while, with Leeds United presented as Premier League competition. L’Equipe point out they’d already reported similar last week, and now they want to push the transfer further down the road of being agreed.

According to the French newspaper, Perraud ‘will leave’ Brest for Southampton, with Marcelo Bielsa’s Leeds now considered beaten in this race. Despite that, negotiations are continuing to define bonus payments which will be made in future.

The value of the deal is set to exceed €12m, although it’s not made clear whether this includes those bonuses under discussion or is the initial payment Southampton will send to Brest. 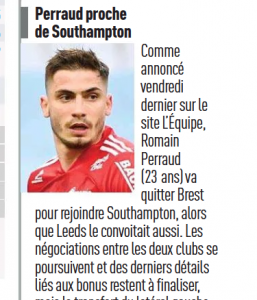 Perraud is 23-years-of-age and has a contract with Brest lasting until June 2025, having only extended his deal in January of this year.