Manchester United and Borussia Dortmund have been credited with an interest in Birmingham City’s Jude Bellingham in the past few months.

The 16-year-old’s wish since March has been to play for the Bundesliga side over joining the Red Devils this summer, according to the German media.

This week’s edition of SportBild states the teenager has an agreement in place to join the German side, which was also reported by the same outlet on May 27th.

It’s claimed that Bellingham is a dream signing for Lucien Favre’s side and a few weeks ago they were willing to make him their most expensive signing.

However, they cannot meet the Championship side’s demand of €35m due to football finances being impacted by the Covid-19 pandemic. They are trying to lower the England U17 international’s asking price and hope to find an agreement with Birmingham at around €20m.

The Blues are ‘financially strong’ and therefore, so SportBild say they don’t need to raise funds by selling their players.

Even a loan with an option to buy, which is discussed internally at Dortmund, isn’t an option. Therefore, signing Bellingham for Dortmund is as complicated as the ‘uncertain future of Jadon Sancho’.

Sancho has been strongly linked with a move to Old Trafford and SportBild add the England international is ‘likely’ to leave Dortmund this summer for around €130m. 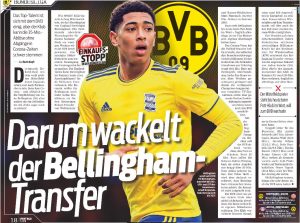 There could be transfer ‘poker’ for Bellingham after Dortmund’s latest stance and it could allow United to get back in the race to sign him.

In addition to this, Dortmund accepting defeat on Sancho could also be a transfer message to Ole Gunnar Solskjaer’s side to step up their efforts to sign the attacker.