It was explained the Manchester United player’s chances of joining the La Liga side in the winter market are slim, but the track is to be followed for next summer.

Mata’s current deal expires in 2022 and Cuezva’s claims are backed up by Friday’s edition of AS. The 33-year-old’s father, Juan Manuel Mata, who is also his agent, had an ‘informal meeting’ with Aperribay, that was scheduled a while ago.

During the discussion, the possibility of the former Chelsea star joining La Real as a free agent next summer was ‘put on the table’.

Online, AS provide more information on this case. The outlet states the Spaniard will ‘not renew his contract’ with the Red Devils and therefore, can negotiate with clubs outside England.

It’s claimed that it is not the first time Mata Sr has talked about his son with Aperribay.

The recruitment unit of Real Sociedad have been following the attacking midfielder’s situation at Old Trafford for a ‘long time’, but an opportunity never presented itself for the signing. 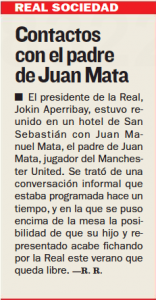 That has now changed because AS explain the agent has offered Mata to the Spanish club. The latter ‘value the possibility’ of securing the Manchester United player’s services next summer, especially if Adnan Januzaj decides to leave the club as a free agent.

The deal for Mata to join Real Sociedad on a free transfer next summer is ‘far from close’ since the United man has ‘other open negotiations’.

If Real Sociedad remain keen on hiring Mata for nothing, their president’s close ties with his father-agent could favour them.