The midfielder and the centre-back started against La Roja, while Martial had to settle for a place on the bench.

Varane, however, was forced to come off just before the break due to an injury. He was replaced by Dayot Upamecano.

This immediately led to concerns at Old Trafford about his availability for the weekend clash against Leicester City. The Manchester United summer signing underwent initial tests before making a trip to England and early signs suggest he is ‘unlikely to be able to play’ against the Foxes. 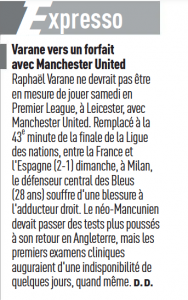 That’s according to L’Equipe on Tuesday, who say the player is set to further undergo more tests on his return to Manchester, after a right adductor injury was found.

However, the ‘first clinical examinations’ indicate Ole Gunnar Solskjaer will be without the former Real Madrid star for a ‘few days’.

Manchester United missed Harry Maguire in their 1-1 draw against Everton and he is now joined by Varane, who are unlikely to be available for the tie against Brendan Rodgers’ side.