Manchester United’s need for a centre-back isn’t exactly something well hidden, with neither Victor Lindelöf nor Eric Bailly seemingly the right man for the job alongside Harry Maguire.

Many names have been linked with a move to Old Trafford, with star players such as Kalidou Koulibaly and Jules Koundé appearing in column inches around Europe on a near weekly basis.

One centre-back we haven’t seen, however, is Merih Demiral, who is on the transfer list at Juventus these days.

The defender is one of many players who could be sold this summer by the Serie A side as they undergo an overhaul after a disappointing season, and Manchester United are one of the interested sides.

That’s according to Corriere Torino, who explain both Atlético Madrid and the Red Devils are among ‘half of Europe’ currently keen on the Turkey international. 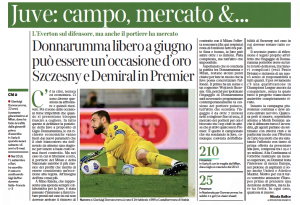 Whether either make a move for him remains to be seen, but it’s made clear Juventus are ‘in a hurry’ to sell, despite Demiral wanting to wait until after the Euros to choose his next destination.

Something to think about, as the Italians would want a bit more than €30m for their man, making him extremely affordable for United, even during difficult times financially.