Remember that clip of Ole Gunnar Solskjaer appearing to jokingly tell Nathan Aké his club were looking for a left-footed centre-back?

Well, it won’t be the Dutchman since he went off to Manchester City in exchange for £40m or so on Wednesday, but it could be Gabriel Magalhães.

At least, that’s what La Voix du Nord are suggesting on Thursday, claiming Manchester United ‘haven’t said their final word’ when it comes to the Brazilian defender.

Currently contracted to Lille, the centre-back has been given the green light to leave, and the Ligue 1 club are simply waiting for him to make his mind up.

The article explains he has, and his preferred destination would be Arsenal after recent exchanges with the London club. 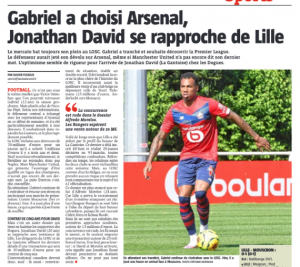 It’s said he wants to move as quickly as possible, which is all well and good, but the Gunners recently made it clear they aren’t flush with cash and Lille want €30m.

That’s why there could be a small opening for Manchester United, especially after they managed to qualify for the Champions League.

They’d likely quite comfortably afford the €30m asking price, but they now have the task of quickly convincing him that a move to Old Trafford would be better than playing under Mikel Arteta.

Then again, this wouldn’t be the first time Manchester United were used by Lille to try and get a better deal for one of their players…