Recently fully breaking onto the scene at AS Monaco, Aurélien Tchouaméni isn’t looking back.

Like many of those who went through the principality club before him, the 21-year-old is now attracting interest from some of the biggest clubs in the world, as well as quickly becoming a mainstay in Didier Deschamps’ France national team.

While Chelsea and Liverpool have often been touted as teams following his progress, Manchester United, until recently, have not.

That being said, Le Parisien in France bring Ole Gunnar Solskjaer’s side back into the mix, claiming the Red Devils, alongside the aforementioned two Premier League teams, are ‘attentive’ to his situation.

After all, the need for a new midfielder is apparent, with many feeling Fred and Scott McTominay could be improved upon, and Tchouaméni’s partnership with Paul Pogba during the UEFA Nations League was there for all to see. 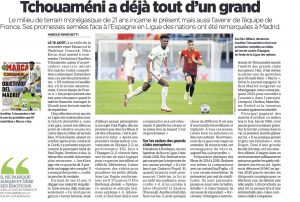 The Manchester United midfielder has already praised his compatriot in the past, and with the club trying to tie their star down to a new contract, the promise of signing a player he knows well and can play alongside could go a long way to convincing him to finally putting pen to paper.

This is merely us speculating, but the interest from Carrington in the AS Monaco starlet certainly would make sense, and partnering him with his national teammate would certainly make any future integration on and off the pitch easier to manage.

As for the price, the belief, mostly from Spain, is that Tchouaméni would cost around €60m, with the principality side fully aware of the talent they have at their disposal and the nice profit they can make from a sale with so many big clubs interested.