On October 7th, L’Equipe reported Paul Pogba no longer hides his desire to sign a new deal at Manchester United. His current deal will expire in 2022.

A day later, the midfielder was quizzed on his Old Trafford future beyond this season, but he kept the cards close to his chest.

The 28-year-old starred in France’s UEFA Nations League success and his ‘great  performances’ for the national team this month have seen Real Madrid interest in him reappear, according to AS.

Pogba hasn’t signed a new deal so far, even though United ‘want to renew’ his contract. He is now ‘presented as a fantastic market opportunity’ for his suitors, since they can potentially sign him for nothing next summer. 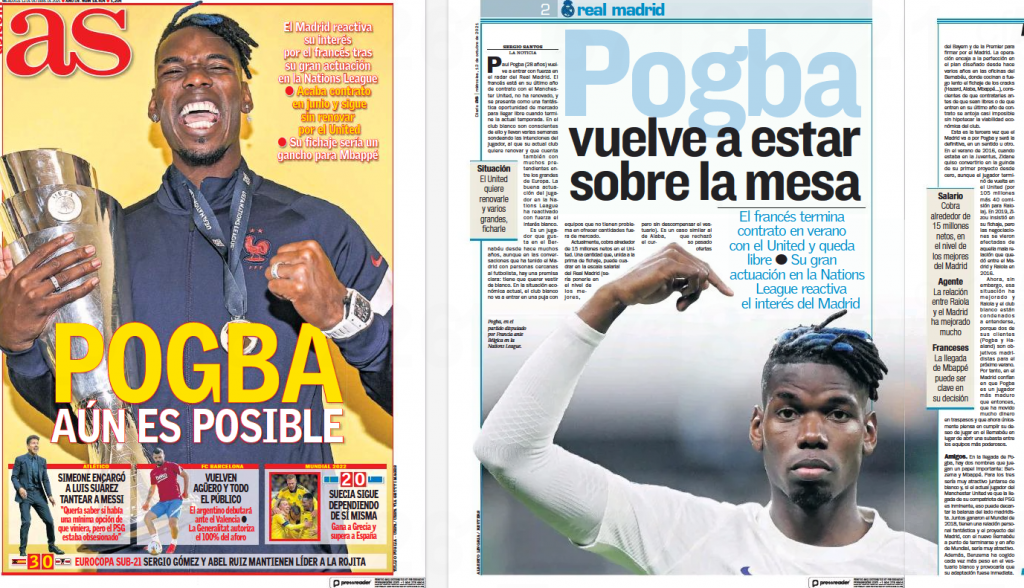 The La Liga side are aware of this and have been probing the Frenchman’s intention for several weeks. He earns €15m per season and this is the figure Los Blancos can match, including a ‘transfer bonus’.

Real Madrid failed to sign Pogba on two different occasions in 2016 and 2019. It will be their third attempt in 2022 and ‘will be the final one, in one sense or the other’. Their relationship with his agent, Mino Raiola, has also improved.

Carlo Ancelotti’s side are keen to sign Kylian Mbappé on a free transfer next summer. The report states he and his compatriot, Karim Benzema, will ‘play an important role’ in convincing Pogba to arrive at the Bernabéu.

Mbappé is currently at Paris Saint-Germain and if he were to end up at Real Madrid, AS say that may ‘tip the balance’ for Pogba to favour the Madrid club over other suitors.

To sum it up, United want to secure Pogba’s long-term future, but Mbappé signing for Real Madrid could see him favour a move to the Bernabéu.