Home Europe Man United among ‘most prestigious’ suitors for midfielder – ‘No shortage of...
SHARE

With Paul Pogba out of contract in the summer, it’s only natural for Manchester United to be looking for replacements, and Aurelien Tchouaméni, although a different profile, remains a target for them.

That’s according to L’Equipe, who state multiple clubs, among the ‘most prestigious’ in Europe, are after him, and the Red Devils are one of them.

They join Chelsea, Juventus and Real Madrid, but it’s made clear ‘none have yet gained the advantage over the other’.

‘There is no shortage of contenders’ for the player at this moment in time, and it’s pointed out that AS Monaco ‘don’t need cash’ and the player ‘doesn’t see himself leaving’ midway through the campaign. 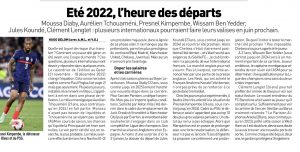 This means a summer transfer is far more likely for Manchester United or anyone else, which falls in line with Pogba leaving when his contract expires.

Back in October, it was made clear that the Old Trafford side did not ‘lose sight’ of the 21-year-old, and that appears to still be the case to this day.

Either way, it will be expensive to get Tchouaméni out of the principality club, such is the competition and his status on the transfer market these days.