Manchester City are ‘preparing to make a proposal’ for Sporting’s Nuno Mendes, according to A Bola.

After making his debut last season, the left-back has been a regular this season, making 28 starts in the league.

His displays for Sporting have pleased Pep Guardiola and Txiki Begiristain, and both the manager and the Citizens sporting director like Mendes.

It’s claimed ‘conversations’ between the two sides have already started and the newly crowned English champions are ‘ready to move forward’ to sign the 18-year-old after their season ends.

In other to secure the Portugal international’s services, the newspaper adds the Premier League winners ‘promise to move from approaches to proposals.’

Although Mendes is one of the important players under the orders of Rúben Amorim, Sporting are aware the teenager has ‘most market value’.

The club have a ‘chance to make a historic deal’, which is why they are open to carrying out negotiations for the fullback’s transfer.

Sporting’s current record sale stands at €55m, which they achieved when Bruno Fernandes moved to Manchester United in January 2020. A Bola explain there’s belief at the Portuguese club that Mendes could be sold for a similar figure.

To ‘facilitate’ the operation, Pedro Porro could play a vital role. He’s on loan at Sporting from City and there’s a €8.5m option to buy. They plan to exercise it in the summer. 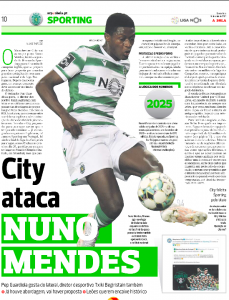 A Bola then state: ‘Even when dealing with different businesses, and always being presented as different operations, the fact is that when they happen at the same time, they end up facilitating each other even in economic terms, between two clubs that maintain a cooperation protocol…’

This suggests Sporting would be open to the idea of allowing Mendes to leave if they can earn big through his sale.