Earlier this week, Manchester City manager Pep Guardiola admitted it is very difficult for Barcelona to take Bernardo Silva away from the Etihad.

That, however, has not stopped the Catalan media from discussing the La Liga side’s interest in the 27-year-old.

Mundo Deportivo state Silva is a priority target for Xavi Hernández if Frenkie de Jong were to be sold this summer.

The City star is aware of Barca’s interest and is motivated to start a new adventure at the Camp Nou. The Blaugrana have talked about him with his agent, Jorge Mendes, on several occasions. The last time was yesterday when the super-agent was in Spain.

Silva is scheduled to meet the Citizens to discuss his future. He understands that Xavi’s side have to first present an offer to City, to assess it at next week’s meeting. 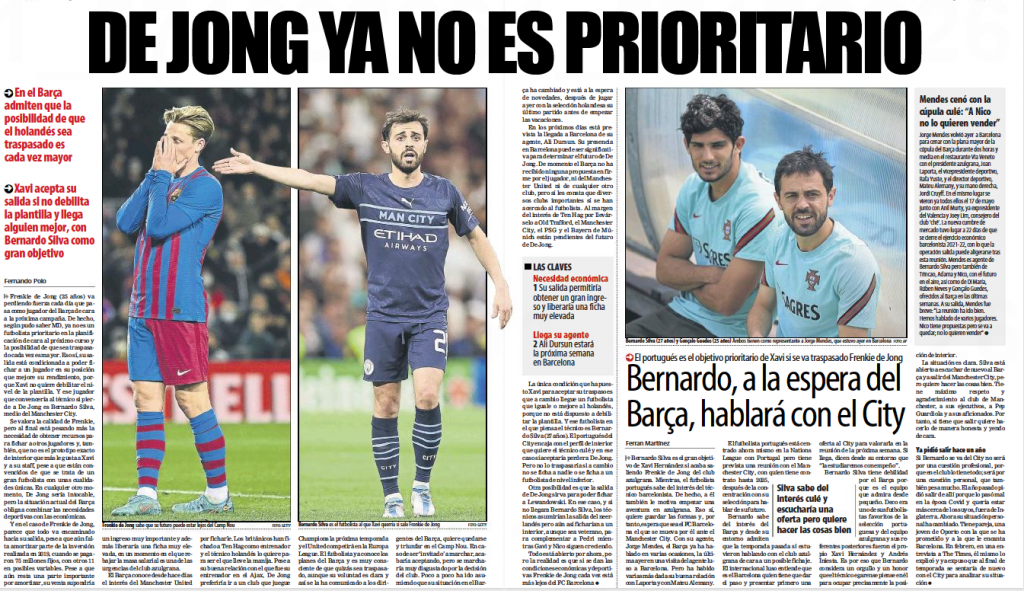 It’s said the Portugal international has a ‘weakness’ for Barca since he admired them from a young age. Deco was one of his favourite players, along with Xavi and Andrés Iniesta. Therefore, it is an honour for Silva that the current Camp Nou manager thinks about him.

The former AS Monaco man is open to leaving City for Barca, but wants to do it the right way since he has respect for City, their leaders and Guardiola.

Another report from Mundo states the Premier League winners are in the mix for De Jong. Xavi is ready to let the Netherlands international leave as long as Barca bring in another midfielder. This is where Silva fits into the manager’s idea.

The manager would not let De Jong man leave if no replacement comes, or if a lower-level player were to be signed. De Jong’s agent, Ali Dursun, is scheduled to arrive in Barcelona in the next few days and this could be significant in determining his client’s future.