Sergio Agüero will leave Manchester City after this season and the Citizens will need to invest in signing a replacement for the Argentine.

Corriere dello Sport on explain the Serie A side will have to make ‘one of two sacrifices’ to help them improve their financial situation.

It’s claimed Manchester City and Barcelona have ‘probed the ground’ for the Belgium international, and the report provides the Nerazzurri’s stance on their star striker, who has 25 goals and seven assists this season.

The Belgium international’s farewell from the San Siro will be ‘very complicated’ if Antonio Conte decides to continue at the club.

Inter, for their part, have slapped a valuation of €120m on the former Manchester United 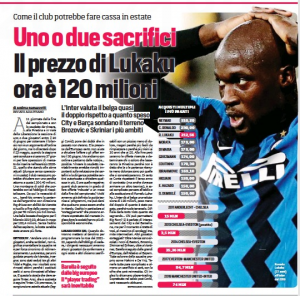 man, and the price is set high ‘because they want to keep him’.

Corriere once again point there has been ‘talk of interest’ from Pep Guardiola’s side and Barcelona. However, at the moment these are only rumours or at most, the surveys have been carried out through intermediaries.

This suggests neither City nor Barca have taken any concrete step so far for signing Lukaku.