Wolverhampton Wanderers were unhappy with Rúben Vinagre’s limited playing time during his loan stay at Olympiacos in the first half of the season.

The Premier League side cut short the 21-year-old’s temporary stay in Greece and then sent him out on loan to Famalicão in January.

Vinagre has been able to enjoy regular minutes in the last few months and has made 12 league starts for the Portuguese side. His displays have gathered attention from top clubs in the same league.

On March 26th, A Bola reported Benfica are keeping an eye on the left-back. Latest rumours have stated Sporting are interested in the Wolves owned player.

Record have relayed the recent claims regarding Sporting’s interest and then provide a short update on the fullback. 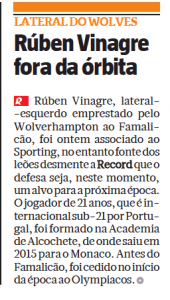 Their title states ‘Rúben Vinagre out of orbit’ of Sporting. Within the report, it’s stated a source from the Lisbon club ‘denies’ the Portugal U21 international is a Sporting target for next season.

Vinagre is set to return to Molineux after this season and his contract with Nuno Espírito Santo’s side runs down in 2024.