On Monday, Sport reported Manchester City are studying a formula to invest €750m in taking Lionel Messi on a free transfer.

The Citizens’ idea is to pay gross wages of €500m for five years [last two years at New York City FC] and offer a signing-on bonus of €250m when he moves to the MLS.

Ronald Koeman conducted his first training session on Monday. The forward was not part of yesterday’s session and he also didn’t turn up for the PCR test on Sunday.

Today’s edition of Sport explains the 33-year-old and his advisers consider the Argentine is no longer a player of the Catalan club because his contract with them has expired.

Therefore, he has no association with Barca, which is why he didn’t show up to Monday’s training session.

Messi’s contract at the Camp Nou lasts until 2021, and a clause allowed him to leave the La Liga giants on a free transfer after the end of the last season.

Barca state the clause is no longer valid and are referring to his €700m release clause, a stance which has been backed by La Liga.

It now remains to be seen whether or not Barca will take any disciplinary action against Messi for breaching his contract by not showing up for training.

Sport are of the belief the ‘Messi case’ could be dragged through the courts, and this is where City come into the picture.

The English side are owned by the City Football Group and the latter have informed Messi they will bear ‘all the economic consequences’ if he joins the Premier League club.

Barca, as of now, are refusing to negotiate the South American’s sale, and want him to finish his final year of his contract.

This may lead Messi to ‘File a complaint with the FIFA Player Committee to obtain the transfer that allows him to sign for Manchester City.’ The newspaper states the procedure is fast and the verdict will be given in a few days.

Barca could take Messi to FIFA and also drag him to local courts for breaching his contract. 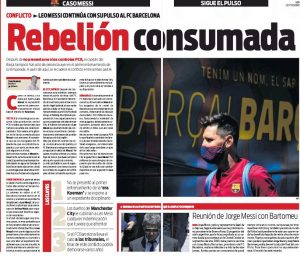 To sum it up, Sport’s report suggests City are backing Messi to join them on a free transfer and the City Football Group will bear ‘all the economic consequences’, if Barcelona decide to challenge his transfer in court.