On August 31st, Het Laatste Nieuws reported Leicester City are in negotiations with Atalanta for Timothy Castagne, and it was stated the fullback’s transfer could be concluded for €20m plus bonuses.

Today’s edition of Het Belang van Limburg gives the background on Foxes’ interest in the 24-year-old.

It’s claimed Brendan Rodgers’ side have been keeping an eye on the defender for more than a year, and they knocked on the Serie A club’s door last summer.

However, there was competition from Ben Chilwell and Ricardo Pereira in the left-back and the right-back positions respectively. The Belgium international preferred to play on the right, while the Premier League club wanted to use him on the other side of the defence.

The situation is different right now as Chilwell has left Leicester for Chelsea and Pereira is sidelined with a serious injury. In addition to this, the backup options, Christian Fuchs and James Justin, haven’t been convincing so far.

This is why Leicester started talks with Atalanta for Castagne, and although the negotiations are not simple, they have been constructive.

The English club have ‘already made an offer’ of around €20m, and ‘would like to finalise the deal quickly’ because Castagne will be on international duty with Belgium this week.

Leicester’s proposal is acceptable and HBVL state the last few details of the transfer need to be finalised.

Paris Saint-Germain also wanted the player, but he wasn’t keen on playing in Ligue 1. 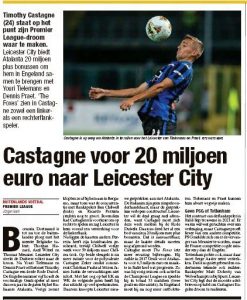