Home Europe With player said to be ‘very advanced’ in move to Manchester United,...
SHARE

After dropping points against Sheffield United, Everton and West Bromwich Albion, Manchester United have suffered only one defeat in the last 14 matches.

The Red Devils have kept nine clean sheets and conceded only seven goals in those 14 matches.

Despite the centre-back pairing of Harry Maguire and Victor Lindelöf impressing with their performances in recent weeks, United continue to be linked with other central defenders.

Real Madrid’s Raphaël Varane is among them and El Chiringuito TV journalist Jose Alvarez Haya reported on Thursday the 27-year-old is ‘very, very advanced’ over a move to Old Trafford.

The France international’s contract lasts until 2022 and it was explained Los Blancos assume he will not sign an extension.

Marca on Friday once again explain the La Liga side ‘suspect’ the defender doesn’t want to commit his long-term future to the club as he has ‘not shown any signs’ of willingness to accept the renewal offer proposed to him months ago.

Varane earns €6m net per year and his qualities make him one of the most coveted players in the market. The newspaper points out the past efforts made by United and Paris Saint-Germain for signing him.

If the Frenchman decides against signing renewing his contract, Real Madrid will ‘try to transfer’ him in the next market. 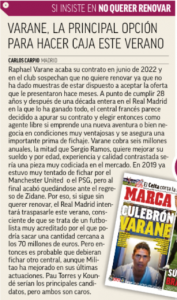 The Spanish giants are of the belief they can earn €70m through the player’s sale and hence, Varane is their ‘main option to make cash’ in the summer.

If he’s sold, the team led by Zidane will likely have to bring in a replacement. Villarreal’s Pau Torres and Sevilla defender Jules Koundé are identified as targets, but both are expensive.

With Real Madrid ready to allow Varane to leave [if he doesn’t sign an extension], this news may be well received at Manchester United.