The Wolves striker scored his first goal, a winner against Southampton, since returning from his skull fracture, and in his home country they couldn’t be more pleased for their ‘Lobo Mexicano’ (Mexican Wolf).

Record explains how much they, and everyone in the country, couldn’t wait for Jimenez to again be shouting with joy as he celebrated scoring a goal, and they use this to once again cover his great progress in Europe.

There’s a lot of love for the striker in Mexico and now, understandably, they want to see him return for the national side. During the last international break there’d been some annoyance after he didn’t travel, with the feeling being Wolves had stopped him.

In reality, it was a Premier League wide directive, but with players travelling to red list countries from Tottenham and Aston Villa, it’s fair to say there was some anger in Mexico. 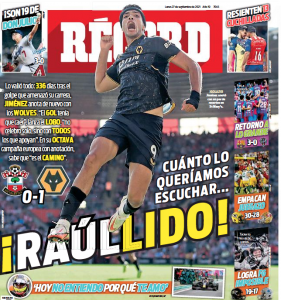 Now with the next international break just around the corner, Record reiterate that the country’s FA has made a request to Wolves, to make sure they have Raul Jimenez available.

However, it’s stated Bruno Lage’s side are still waiting for direction from the English FA, to see what the stance will be.