Barcelona manager Ronaldo Koeman is an admirer of Georginio Wijnaldum and multiple reports have stressed he wants his new club to sign the Liverpool midfielder this summer.

On September 2nd, Sport explained the 29-year-old has given his approval to joining the La Liga side and the latter need to sort out an agreement with the Reds to conclude the deal.

Later that day, De Telegraaf discussed about when the Catalan club could complete the Netherlands international’s signing, if they manage to agree a deal with the English champions.

There was even a suggestion, which originated in Spain, the player was close to sealing a move to the Catalan club but Sport state the Spanish giants were quick to dismiss these claims.

As per the newspaper, the Blaugrana have not entered into official negotiations with the Merseyside club.

Wijnaldum’s contract runs out after the end of the next season. The report states Jürgen Klopp’s side are ready to offload him, but to do that, they first need to sign Thiago Alcântara.

However, Liverpool’s effort to land the Spain international is ‘stagnant’ because they have not found an economic agreement with Bayern Munich.

Barca, for their part, will not enter into the fray for the former Newcastle United man until they see a ‘market opportunity’. They will only sign him if economic conditions are favourable and have no plans to pay more than €15m to acquire the Dutchman’s services. 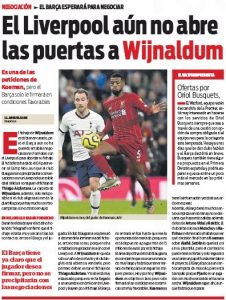 Sport state Koeman is aware of these conditions and has agreed to wait.

In other words, Barca cannot sign Wijnaldum until Liverpool bring Thiago to Anfield, and the operation for the latter is ‘stagnant’ at the moment because Klopp’s side haven’t found an agreement with Bayern.

Mundo Deportivo also state Wijnaldum is not close to joining Koeman’s side and further add his signing is not a priority for Barcelona.