Liverpool have urged AC Milan midfielder Franck Kessie not to sign a new deal at the club as they eye up a bargain next summer.

That’s according to Corriere Dello Sport, who cover the situation around the midfielder today, and the Reds attempts to get him on the cheap.

They explain that getting Kessie signed to a new deal is ‘an absolute priority’ for Milan this summer, with his deal set to expire next year.

That means he can negotiate a free transfer for next summer as early as January, and Milan are obviously keen to avoid that after losing Hakan Calhanoglu and Gianluigi Donnarumma on frees this year.

That’s caused ‘apprehension’ regarding Kessie, particularly as there is a feeling that his agent is looking to use the situation to get the most he can.

In that regard, Liverpool are helping him out as they’ve made their interest clear and already made a ‘concrete move’.

They’ve reportedly urged the midfielder not to sign a new deal, and in reward, they are willing to offer a contract worth €6m a year for him to move to Anfield on a free next year

Such a move would also mean a ‘rich commission’ for his agent, who can now use the offer in his negotiations with AC Milan. 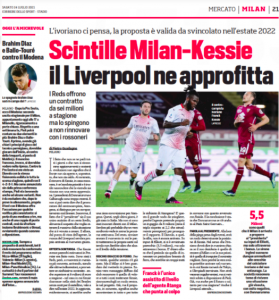 They’re likely to meet next week, but there have already been some disagreements between both parties, a fact Milan have worked hard to keep out of public knowledge.

They want to keep Kessie at all costs, but they are yet to match Liverpool’s €6m offer, which is three times what the midfielder currently earns.

Their best offer so far was €5.5m, but that’s made up of bonuses, so nowhere near what Jurgen Klopp and co are offering.

This could trigger a ‘dangerous tug of war’ and ultimately leave Kessie to leave for Liverpool, with the Reds ‘waiting’ to see if their strategy pays off.