Liverpool strengthened their goalkeeping position by bringing Brazil No.1 Alisson Becker from AS Roma before the start of the season.

His arrival has made it sure that Simon Mignolet’s playing time under Jurgen Klopp will now be further limited. The former Sunderland man was linked with a move away from Anfield, but no deal materialised.

The Merseyside club’s goalkeeper will have less than a week’s time – before the transfer window in other European leagues closes – to change the situation.

His compatriot, Nacer Chadli is yet to find a new club and a failure to do so before the end of this month could see him continue at West Bromwich Albion.

Belgium manager Roberto Martinez has expressed his concern about Mignolet and the West Brom man, while explaining how Eden Hazard’s position at Chelsea.

“He [Hazard] is ready for the new challenge and the new manager. I’m more worried about players in a hopeless situation. Mignolet and Chadli will indeed be in a very bad situation, if they do not play,” Martinez told Belgian newspaper De Standaard. 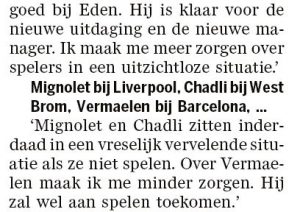 If Mignolet and Chadli continue at their current clubs and their situation does not improve, they could lose their place in the national team.