They’ve spoken to him about his start at Barcelona, where he first met Pep Guardiola, although he wasn’t one of his players in the first team.

The Spanish midfielder has also been a hot topic in the transfer window, when it’s claimed the likes of Liverpool and Tottenham were keen.

Marca recalls these big stories from the summer, telling how Dinamo Zagreb stopped the Spaniard from moving. 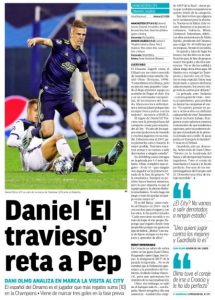 The newspaper claims that Bayer Leverkusen, Valencia, Milan, Liverpool, Tottenham and Atletico Madrid have all ‘knocked on the door’ to get Olmo.

Dinamo Zagreb president Mirko Barisic made it clear he wanted €35-40m to let the player go, and that made things a lot more difficult.

Olmo has five goals and five assists in only eight games for Dinamo this season. Given his stats, perhaps Barisic was right, and in case the midfielder has good performances against Manchester City, he could be worth even more than that.