Back in June, a few reports from Portugal claimed that Liverpool were interested in Porto midfielder Fabio Vieira.

It was said the Reds had been in touch with the player’s agent, and to get a deal done, they’d need to trigger his €30m release clause.

That rumour suddenly went quiet, and as newspaper Record today features a piece on Vieira’s potential renewal, the interest from Jurgen Klopp’s side is recalled.

The outlet writes that since the player’s contract expires next summer, Porto now see his deal as a priority. They want to extend his link to the club and raise the release clause to €50m. 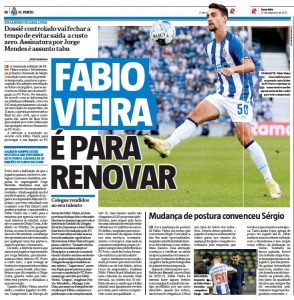 Record then points out the ‘rumours’ which linked him to Liverpool. They say nothing happened because the player ‘always gave Porto his preference’.

It’s said the Dragons didn’t get ‘any satisfactory offers’ in the summer, and that’s why he was never even close to leaving.

What seems clear now is that the midfielder is about to get a lot more expensive, unless someone shows up and finds a deal before the new contract is signed.