Despite Sky Sport in Italy claiming that Juventus have already offered Emre Can a five-year deal ahead of the summer, Gazzetta dello Sport on Monday suggest that isn’t the case.

In fact, the Italian newspaper explain talks to that effect are set to officially start today, with a request from the Serie A club to be sent to Liverpool in order to ‘request the club the establishment on contact with the German midfielder’.

By doing this, Juventus will be following the FIFA rules when it comes to approaching players with expiring contract. 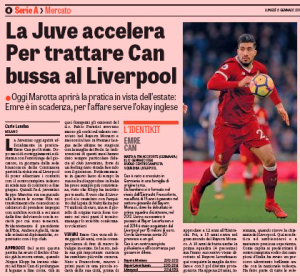 Knowing this was coming, Liverpool are said to have made a last ditch attempt to retain the soon-to-be 24-year-old for Jurgen Klopp, but Gazzetta dello Sport seem to think that won’t achieve much, considering he hasn’t accepted any of their previous attempts.

For Juventus, this is all going to plan, Beppe Marotta’s plan, and this is likely to end up being a blow to Klopp and his side, even if they’ve been bracing themselves for some time.

At least he’s now expected to stay until the summer.