As is the case with most Premier League clubs, Liverpool have numerous players out on loan this season, and one of them is Taiwo Awoniyi.

The 23-year-old forward is spending the season with Union Berlin in the Bundesliga, the 7th straight loan he’s been on since arriving at Anfield in 2015.

It’s his second year in Germany, having spent last year on loan with Mainz to little success, managing just 12 appearances, one goal and 475 minutes of football in total.

This year, things are going a little better, with one goal in six games and 267 minutes of action under his belt so far and that’s led Kicker to have a look today.

They say the Liverpool loanee is ‘now a key figure’ at his loan club, with injuries to Anthony Ujah and Joel Poh-janpalo meaning he is the only remaining centre forward in the squad.

Key to him showing much more than he did last season is him playing ‘in the position that suits him’ according to coach Urs Fischer, who has used him as a centre forward not a winger.

That was what happened at Mainz, where he was ‘left out’ or ‘played on the wing too often’ despite it not being the ‘optimal sphere’ for the player. 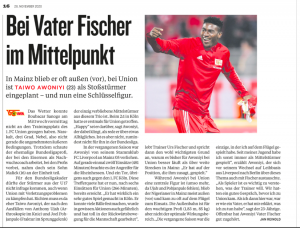 It’s something the Liverpool man acknowledges, admitting that last season was the first time he’d been used out wide, an issue he discussed with his new boss.

“As a player, it is important to understand what the coach wants,” he told the newspaper.

“We had a good talk before I came to Union. When I was here, he was like a father; he explained to me what I had to do.”

That conversation seems to have done the trick, and all that remains to be seen is if Awoniyi can take the opportunity presented to him, starting with a clash against Eintracht Frankfurt on Saturday.